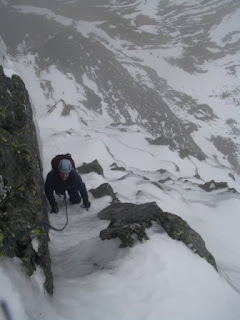 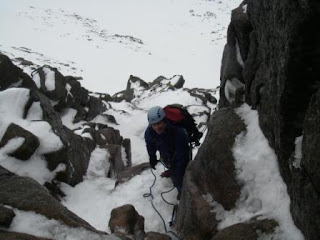 Back up to Scotland for a short hit with my Dad.

Yesterday, after a few skills, I took him up the Haston Line and Hidden Chimney in the Cairngorms. Dry weather but warm, the crag slowly turned from white to black during the day.

Today we ascended the NE buttress on the Ben. Again it was dry with light winds, though a little warm. There is still a lot of ice around, and the route was very climbable although a little damp. 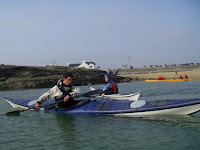 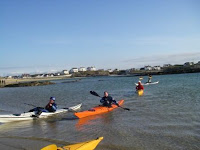 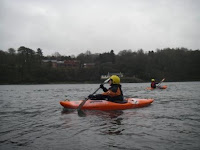 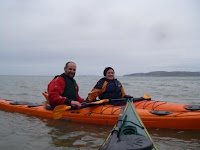 During last week I ran a variety of kayaking courses. Over the weekend, with James from adventure elements, a Dof E sea kayaking training course for 12 young people. Then during the week a sea and white water introduction. I have added a few photos of both courses. 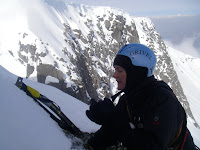 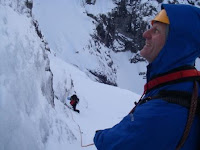 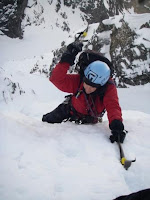 A little time since my last blog entry. I have added a few photos from the 16-19 March, a great week in Scotland with blue skies and good ice on the Ben. During the week I took Amy up Two Step (V) and had her leading on the Web (II/III) on Aonach Mor and Good Friday (III) on the Ben. 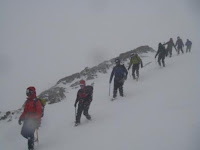 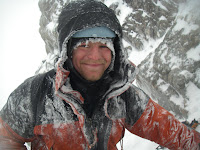 A dramatic change took place on Saturday night with the temperatures dropping, the freezing level was about 400m on Sunday.
Matt and I went up to Ben Nevis to see what was climbable on Sunday. Unfortunately the old snow hadn't fully frozen with a breakable crust making progress near impossible at times, sinking waist deep in snow. There was also a build up of new snow, which was quite substantial by the end of the day. We chose to do the SW ridge of the Douglas Boulder as vanishing gully had appeared to vanish. This provides a couple of interesting moves over 3-4 pitches. Upon returning to the ground the wind had increased significantly, with strong gusts blowing us around.
On Monday I worked the first day of a Jagged Globe course in the White Corries. We found good sections of neve where the fresh snow had been scoured. At times we even saw the sun!
Posted by Gareth Davies No comments: Links to this post 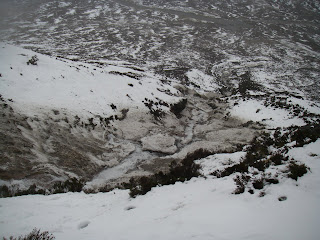 On Friday and Saturday I worked with Frank, developing his climbing technique to move from grade III to more IV and V. Day 1 we used the Ice Factor and Onich Slab, to work a range of ice and mixed techniques, that saw him relaxing on his axes by the end of day and competently using his feet.
Day 2 (Saturday) was not ideal conditions with rain at all levels and high wind, along with avalanche hazards on many slopes. We went up to do the main pitches on North Buttress on Buachaille Etive Mor which is safe and climbable in all conditions. We put into action all the techniques learnt on the previous day before abseiling back down. This was the point we heard a big 'boom' and witnessed a wet slush avalanche violently blasting down Great Gully. It was an impressive sigh from our safe vantage point and the debris is visable in the attached photo.
Posted by Gareth Davies No comments: Links to this post 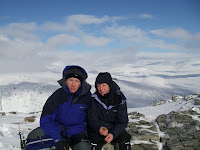 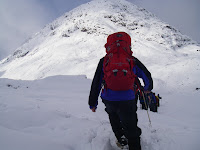 Snow up to head height!
Today we had fresh snow down to the road along with blue skies and light winds. In the drifts it was extremely deep, making progress hard. I took a group up Buachaille Etive Beag , following a wind scoured rise then a few nice rocky steps up to the North summit. We then descended to the col to play around on the old frozen snow that was exposed before returning to the bus.
Other teams were on the zig zags and trail breaking into the Lochan, being careful to avoid the many avalanche prone slopes.
Posted by Gareth Davies No comments: Links to this post

After a mix of sleet and rain falling at all levels yesterday the snow has now returned with a vengeance.
Yesterday I was in the White Corries, at the start of Glen Coe, covering a range of skills with an 'introduction to winter' group. We found a bank of soft snow to slide on, but little in the way of hard snow for crampons. There was a new wet snow layer over the old soft snow pack. High up the winds were gusting 50 mph making walking difficult at times.
Today with blizzards forecast and high winds we opted for a low level skills day looking at navigation on Cow Hill. This hill is about 300m located behind Fort William and had a good covering of snow by the afternoon. The snow line has now decreased to near sea level with a fair amount of it accumulating outside the house.
Posted by Gareth Davies No comments: Links to this post 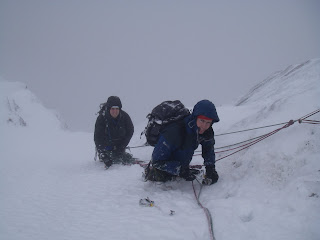 I was working with some old friends over the weekend who wanted to sample the delights of winter climbing. They had been out in winter only once or twice before, so a full range of skills were covered over the two days.
On Saturday we headed to Cairngorms to enjoy the dry pleasant conditions. The snow had partly frozen overnight allowing for a range of boot and crampon skills to be covered before we made an ascent of the Runnel. The later start meant that most parties were up and out the way.
Today we went up to Ben Nevis, walking up to No. 2 Buttress at the back of the Ciste. We found that there had been a substantial amount of snow overnight above 800m. The freezing level seemed to be only 100 or 200m below the summit so much of this fresh snow was wet. On route there were some good ice pitches, that would take screws, so fun was had by all. A quick bum slide down red burn rounded things off nicely.
Posted by Gareth Davies No comments: Links to this post